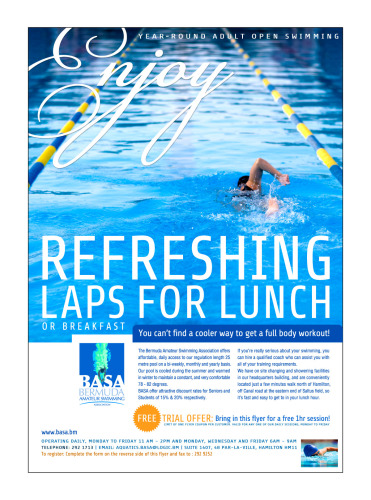 BASA was formed in the 1930’s as the official FINA member, prior to its first major international competition, the 1936 Berlin Olympics. Since then, it has catered to all levels of swimming in Bermuda. Starting at the basics of learning to swim, BASA has founded a number of successful programs, such as Whites Island, Swim Bermuda and Get Wet, which have enjoyed considerable success. BASA’s prime mission was to ensure that age group swimming for children would flourish which led to the building of its 25 meter pool on land leased from Saltus Grammar School in 1981. BASA has maintained an excellent local competitive swimming program and has continued to send swim teams to The Caribbean Free Trade Association (CARIFTA) Games, the Caribbean Island Swimming Championships (CISC), The Central American and Caribbean Confederation (CCCAN) Swimming Championships at the age group level, as well as senior teams to the Island, Commonwealth, Pan Am and Olympic Games and the World Swimming Championships. In recent years the success of our athletes and size of the teams sent overseas has increased dramatically, of note are top swimmers Kiera Aitken and Roy Allan Burch, who both competed in the Olympic Games 2008.

The current structure consists of a volunteer Board of Directors comprised of individuals from its member club organizations. The staff consists of an Aquatics Manager who manages the pool facility and Island wide programs, an Administrative Assistant and a National Coach.