Bermuda’s Marine Ecosystem Has A Big Problem. We Can All Be Part Of The Solution.

Once abundant, the seagrass beds around Bermuda are now greatly diminished. There was a 25% loss of seagrass area between 1997 and 2004, with greater loss in the offshore seagrass beds than the inshore beds (Murdoch et al. 2007).

Studies by the Department of Environment and Natural Resources (DENR) from 2007 to 2017 at 17 seagrass sites showed that seagrass habitat continued to decline, and that many inshore sites were affected as well (Fourqurean et al. 2019). At the 17 DENR sites, seagrass cover disappeared completely at 3 and was reduced in density by 75% or more at another 10.

These seagrass beds perform many essential functions making them critical to life as we know it in Bermuda. To understand why this is happening, why it matters, what is being done to reverse the situation and what each of us can do to help, read on.

WHAT ARE SEAGRASS BEDS?

Bermuda’s seagrass meadows provide a number of essential environmental services. An informative article published by the Department of Environment and Natural Resources notes that their presence “is the basis of a complex food web and is essential for food security to many animals including humans.” They can also reduce coral disease; prevent algal blooms; increase the pH levels enough to protect nearby coral reefs from the effects of ocean acidification; and reduce carbon in the atmosphere and produce oxygen during that process. Last but certainly not least, they provide shelter for juvenile fishes, seahorses, queen conch and lobsters.

the cause of Bermuda’s more recent platform-wide seagrass decline is a little more unusual, and perhaps unbelievable to some.

WHY ARE THEY DISAPPEARING?

With global warming and pollution making headlines practically every day, it would be understandable to assume that our seagrass decline had everything to do with warming seas and pollution resulting in poor water quality. While they may be factors, water quality measurements to date show Bermuda’s waters to be quite healthy.

That said, human activity has played a significant role in the destruction of seagrass beds in our inshore waters. Boat moorings with chains that drag across the seabed are major offenders as are propellers and anchors. Shoreline development, dredging, land creation, installation of docks and boat groundings all negatively impact seagrass.

But scientists at the Bermuda’s Department of Environment and Natural Resources (DENR) believe “the cause of Bermuda’s more recent platform-wide seagrass decline is a little more unusual, and perhaps unbelievable to some.” They explain that “green turtle grazing has put unprecedented pressure on our seagrass habitat making a significant contribution to its local collapse.”

What? Haven’t green sea turtles and Bermuda seagrass beds (both protected species) lived in harmony for millennia? They have. Sarah Manuel, Senior Marine Conservation Officer, attributes this current imbalance to two additional factors on top of all the long-term direct human impacts to seagrass around Bermuda.

WHAT IS BEING DONE? 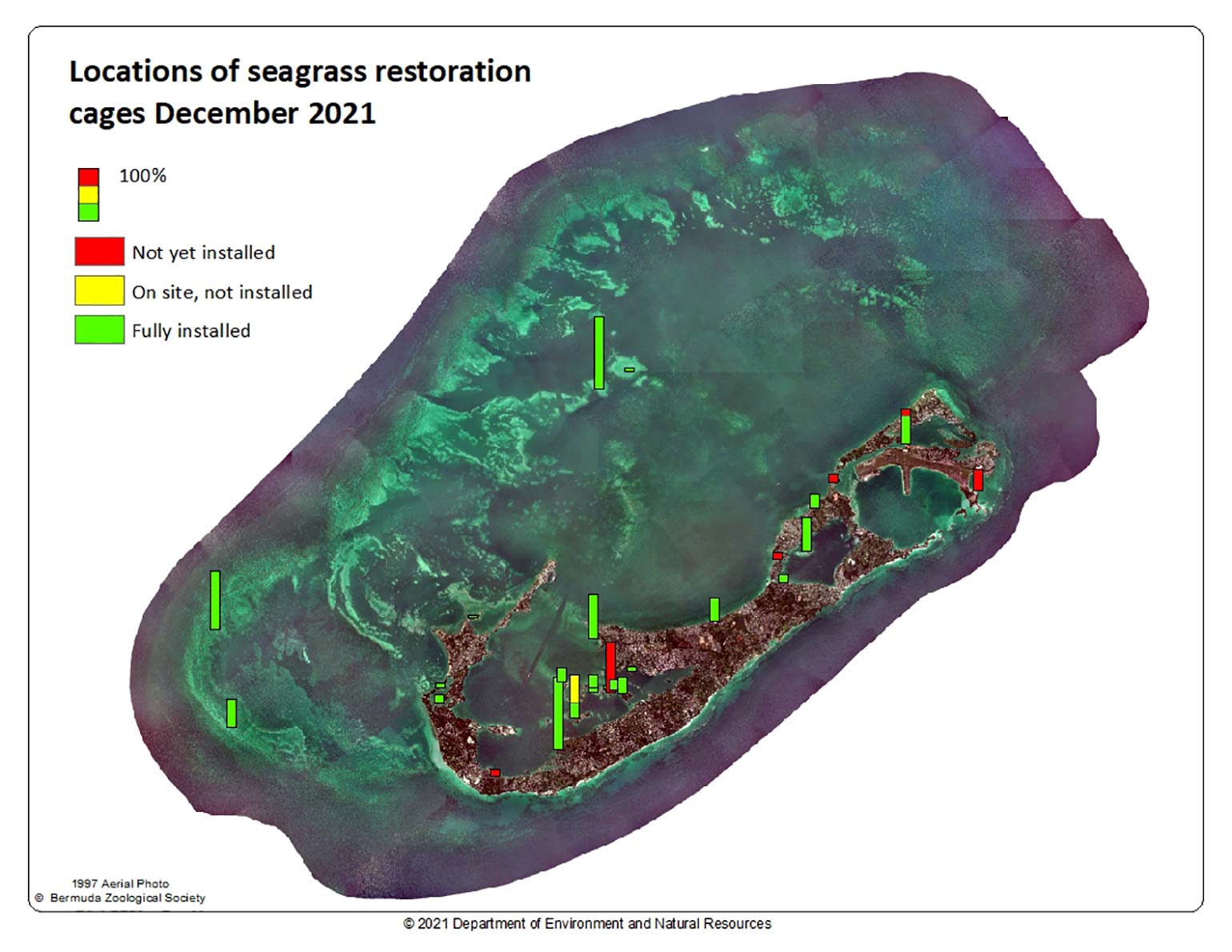 In response, our marine conservation team began a project to protect and regrow the seagrass beds in 2020. The Seagrass Restoration Project aims to create seagrass refuges by caging (fencing) the remnants of seagrass habitat across inshore and offshore areas thus protecting it from further grazing by green turtles. This will allow the seagrass to regenerate and, in time, the essential ecosystem functions they provide will be restored.

The project consists of a series of seabed cages placed around the island that are designed to protect the seagrass beds giving them the opportunity to recuperate and hopefully expand. It’s important for the public to know that these cages are in fact part of an environmental rescue project and should not be disturbed. The locations of the cages are marked with signed buoys.  Results so far vary but on the whole have been encouraging with strong growth in several locations.  It is important to note that turtle grass is slow growing, sometimes taking five or more years to recover.

HOW CAN YOU HELP?

Thank you to the Department of Environment and Natural Resources for the important information provided in this article. For a detailed update on the Bermuda Seagrass Project, check out the Winter 2021 edition of Envirotalk.

If you’d like to receive DENR’s quarterly newsletter Envirotalk, email envirotalk@gov.bm and ask to be added to the distribution list.

As previously noted, heavy chains traditionally used in Bermuda moorings drag across the seabed as wind and waves move boats around. This action is very destructive to seagrass beds. Fortunately, there are options. There are several types of environmentally friendly moorings – or conservation moorings – available and in use in Bermuda. But for these options to be put into common use, there will need to be more discussion and coordination within the boating community and perhaps legislation by government.

As Tim Patton of Bermuda Marine Services explains, conservation moorings work well, are comparable in cost to traditional chain moorings and have been installed in several places around Bermuda. But he points out that boats moored in close proximity to each other need to use the same type of mooring to ensure that they respond in the same manner to wind and waves, thus avoiding collisions.

He also noted that while there are several options when it comes to conservation moorings, some will be better suited to Bermuda’s marine environment than others.

Ideas have been presented to government that could significantly expand the successful use of conservation moorings including the installation of permanent conservation moorings in popular boating destinations such as the islands off King’s Point, around the islands in the Great Sound near Paradise Lake, Long  Bay, Somerset and near Admiralty Park, to name a few. It is hoped that concerns for the condition of Bermuda’s marine environment will bring discussions like these to the fore.

Christmas Wonderland will be in the west this year at Willowbank Resort!  Every Monday - Thursday, from 6 - 10...
6 Feb
Christmas

Each Al-Anon Family Group has but one purpose, to help families of alcoholics. Family members of individuals with...
7 Feb
Health

Christmas Wonderland will be in the west this year at Willowbank Resort!  Every Monday - Thursday, from 6 - 10...
7 Feb
Christmas
View More
Advertisement
Previous Next